From Etruscan time to the Middle Ages 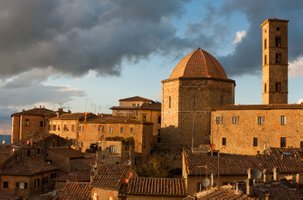 Volterra is a small walled town in an area known as the “Metal Hills” (Colline Metallifere), thus named because of the presence since Etruscan times of copper, lead, silver, and zinc nearby. Here is where the Etruscan confederation held their most important meetings and so there’s a goodly concentration of Etruscan art. Defeated by the Romans, it became a Municipium. Throughout the Middle Ages, the city was a bishop’s residence, until it fell into the hands of Florence and eventually of the Medici family and Grand Duchy of Tuscany. 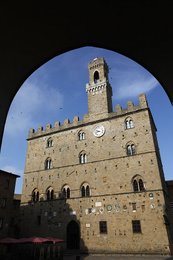 Known also as the Etruscan Gate, the door is part of the ancient defensive walls of the fifth century BC. - originally extended for a distance of more than 7 km - and is crowned by three lion-heads carved in the stone (nearly unrecognizable).

The interior, while retaining the Latin cross plant, has three naves and a late-Renaissance appearance. The space is divided by twenty-two columns covered with stucco; the walls are painted in stripes of white and gray; the presbytery and the floor are the result of the nineteenth-century restoration.

designed by Maestro Riccardo in 1239; it has a three storey façade with trilobed double arched windows in the Medieval style. The tower is considered to be one of the first towers built in Volterra and is traditionally known as the Tower of the Little Pig, for the little stone animal at the top.

The Civic Museum boasts the town’s most important painting from the late Renaissance period – Rosso Fiorentino’s Deposition from the Cross is a Mannerist masterpiece from 1521. The rest of the museum contains works that demonstrate the alternating dominations of the Senese and Florentines.

Volterra, home of the deposits of alabaster, hosts a museum dedicated to this precious material, transparent and tough at the same time, already used by the Etruscans to make urns and ornaments. The museum, housed in a former Augustinian monastery of the twelfth century, brings together over 300 works in alabaster from the eighteenth century to the present.

At the foot of the city rises the majestic Roman Ampitheatre

(1st century BCE), definitely one of the greatest Roman finds in Tuscany. The bleachers are still visible, and so are the columns and the proscenium. With a little imagination, it’s easy to see it as the setting of a typical evening party at the time of the Roman Empire.

It contains important Etruscan testimonies: thousands of funeral urns, jewelry, pottery, and other objects from local archaeological digs. The museum was founded in 1761 by a noble abbot, Mario Guarnacci, who collected antiquities and donated his archeological collection to “the citizens of the city of Volterra”. The donation also included a rich library of more than 50.000 volumes now housed in another building. The museum’s two “highlights”are: the cinerary urn called “Urna degli sposi” - a beautiful example of terracotta manufacture, representing a recumbant couple attending a luxurious banquet - and the beautiful bronze statuette of a boy known as “Ombra della Sera” (Shadow of the Evening) - probably an ex-voto figure for fertility, dating to the 3d century BCE. 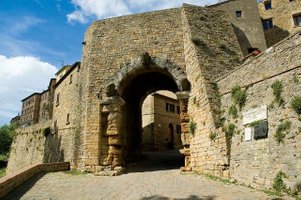 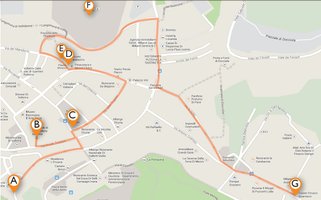 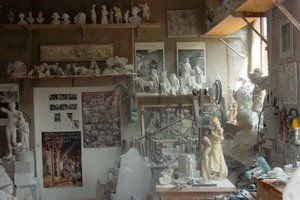 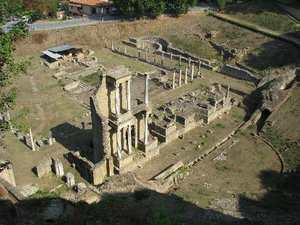